There is one old proverb in the Netherlands: a farmer's daughter who can produce cheese, finds a farmer's son and gets the keys from her husband's new farm. If you want to run a farm with cheese production, there's a lot of work to do. The son of a farmer who takes over the farm and produce cheese from his parents needs a hardworking woman with special skills and knowledge of cheese production technology. The woman she loves must be a physically capable woman, not only in domestic work, but she must also be a wife and mother. 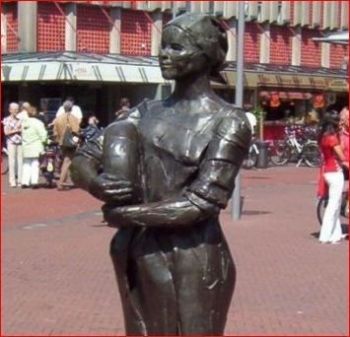 Sculpture of farmer woman in Gouda town In the Netherlands, she is the responsible member of the family who manages and carries out cheese production. Women are aware of this responsibility and do not get married before they are able to play all the important roles in the economy. Firstly, the newlywed woman is a helper of her mother-in-law, but after a few years of handling all the cheese production processes, she has full responsibility for her. Without great enthusiasm and hard work, it is not possible to become a good fella and to be engaged in this mission throughout your life. A school where a young farmer would learn how handmade cheese does not exist, everything depends on the diligence and the passing of tradition and family recipes from woman to woman, from generation to generation.

In the past, cheese was produced twice a day, but due to better technological procedures, evening milk is stored today to be processed the next day, along with fresh morning milk on the next day. This does not mean that work is less intense. In the past, the farm produced about 350 to 500kg of cheese per week, but today it's doubled. The art of cheese production is among the farmers of prestigious affairs. Fortunately, there are now more ways to have cheesemaking technology more under control than before, so the risk (for example, the production of low-quality cheese) is getting smaller.

Selka engaged in production needs a lot of knowledge and skills to handle everything and allow her husband to sell cheese at the market at the best prices. Farmers often sell cheese directly from the farm, and then there is a farmer's farm shop. If she does, she enjoys honoring her and is the pride of her husband. That's nice, but it's just not proud to be able to feed. The tradition of producing cheese at a farm can only be successful if the price of the cheese sold is high enough to cover all the costs associated with its production and also bring the farm a profit. Farmer, a cheesemaker, is increasingly at risk of cheaper, cheaper, cheaper production. 98% of all Dutch cheeses are produced in dairies. Therefore, the farm cheeses we sell in the Czech Republic are rare thanks to handmade work and thus exceptional quality.

This site uses cookies to provide services, customize ads, and analyze traffic. By using this site, you agree. More information